What is the IoT network and how does it work?

New IoT networks, such as LoRa, have a further and deeper range and much lower power consumption than other wireless networks such as 3G, 4G, Bluetooth or WiFi.

You connect your devices to the IoT network that best suits your situation and your business. There are also private networks on the market.

IoT networks are excellent for connecting devices that want to send/receive small amounts of data and use a battery for as long as possible. We often deploy these networks in situations where traditional wireless networks are not or less suitable:

Characteristics of these networks:

The Monitor, Control, Protect and Track and Trace applications of IoT networks, which were not economically feasible until recently, significantly improve the performance of companies.

There are several IoT networks, each with its advantages and limitations. The three best known are LoRa, NB-IoT and SigFox.

Our CLICKEY Ecosystem is network independent and provides solutions for all common networks.

Do coverage or costs require a private network? We can build it!

Want to know more about the possibilities of connecting to an IoT network? 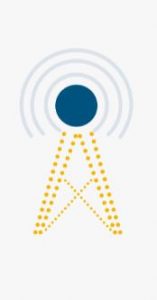 Take a Look at the CLICKEY CONNECTIVITY
CONTACT US

Are you curious what CLICKEY solutions can do for you? Call or mail us! We like to think along with you!